Christmas Stories : Back from rock bottom 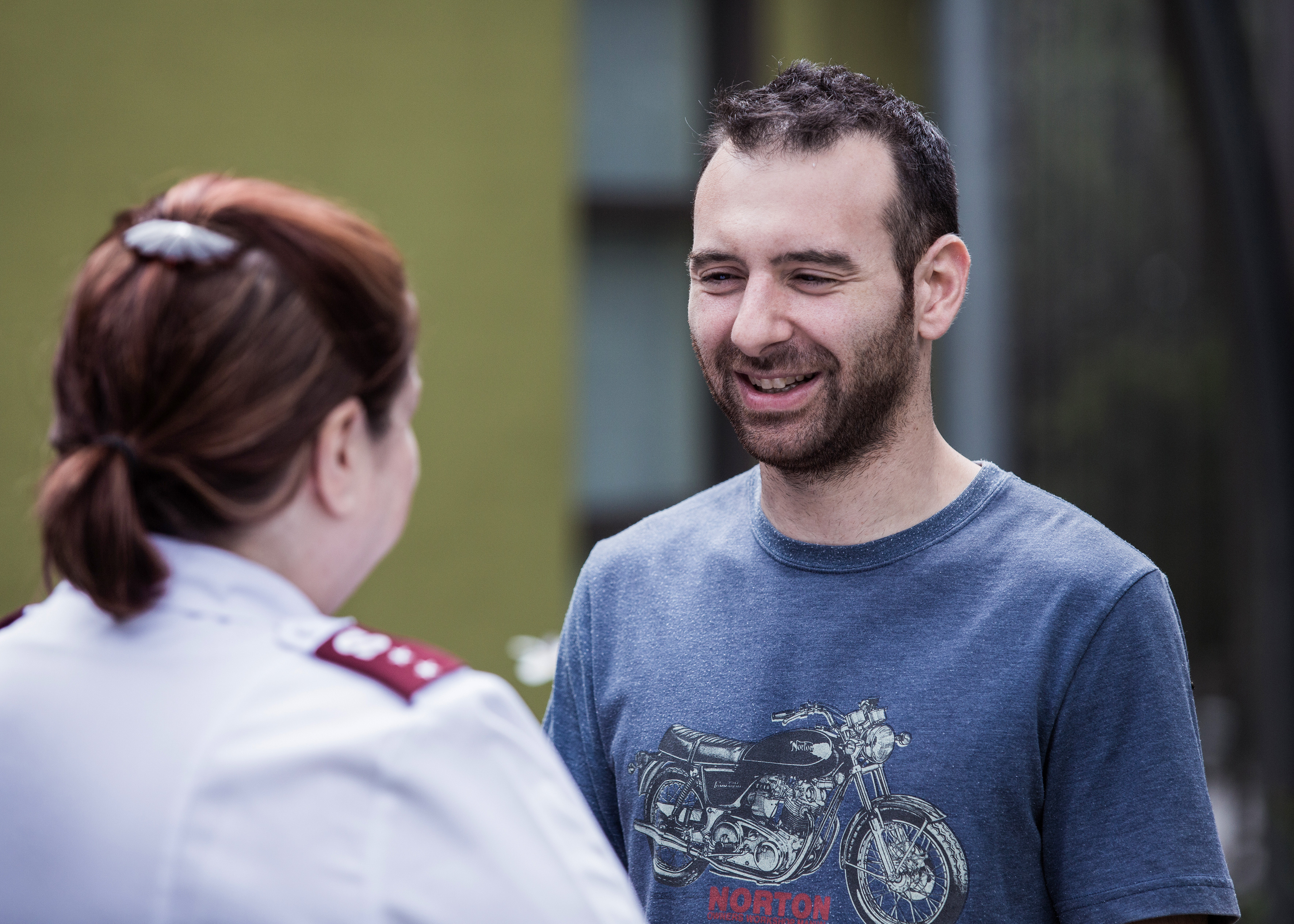 “The Salvos have helped me along the way and that’s been great. From the top of the world to the bottom of it and now I’m getting back up there. You do come back a better person for it. Better and stronger. I can’t wait to get back on me feet to help blokes out like me.” – Daniel

On first impressions, Daniel was, as he says, “on top of the world”. He was married, with four kids. He had a well-paying job as a contract renderer. And he had mates to hang out with after work.

But under the surface, the marriage was unhappy. The arguing led to tension with the children. Add to that the stress of the job and the long hours – and it saw him taking comfort in the bottle.

“I’d come home and get whinged at,” he says. “My resort was to go get drunk. And I worked with a bunch of drunks who’d hound me to go to the pubs and you just join them in the end.”

Losing what is loved most

After Daniel’s marriage ended, time with the kids became scarce. Scarcer, still, when he started living with his new girlfriend.

“I got in a stupid relationship. She was a bit violent towards me,” says Daniel. “The drinking got to me then and I was easily drinking a carton a day.”

But the wakeup call came when Daniel was arrested for driving under the influence of alcohol – with his kids in the car.

“I didn’t think anything of it,” he shares. “I was helping a mate and having a couple of beers. Then went and picked the kids up from school. I went around a truck and a cop pulled me over and that was the end of me.

“The next day I put myself into the seven-day detox program. I turned everything around. I got out of that horrible relationship.”

As Daniel stood in court awaiting his sentence and thinking he was going to prison, all he could think of was his kids. “I didn’t want to lose everything.”

Thankfully, he received a three-month suspended sentence – something he attributes to the fact that he willingly attended detox before his court date.

Free of his abusive girlfriend – and, unfortunately, all the possessions she took with her – Daniel sought a house closer to his kids’ school. It was a step in the right direction, but still held its challenges. He had to wait a few months until it was ready for him, which meant he was homeless and living in a tent for a period of time.

“The kids spent Christmas with me in the tent,” he says. “I made what I could of what I had. It was near the beaches. We had the meal in the barbecue area and still had fun. It was a bit like a camping trip for them. But I didn’t have them around too much when I was in that tent. It was hard on me doing it for a couple of months. I don’t want to go camping for a while now.”

When Daniel finally was able to move into his four-bedroom home, the next reality hit. He had a house, but no beds for the kids.

That’s when his mate suggested he get help from the Salvos.

“It was hard for me to actually go and ask because of me pride. I’d worked so hard in my life, earned a good dollar and I shouldn’t have to use [the Salvos],” he says. “But it got to that stage where I had to put me tail between me legs and go and ask for help. In the end, it was for the kids.”

At Clarence Doorways in Tasmania, Daniel received beds for the kids, items for the kitchen and food for the pantry.

“There would have been nights my kids couldn’t have eaten,” he says.

“Daniel was in a situation he never thought he’d find himself in,” says Janice, Daniel’s case worker at Clarence Doorways. “But he was determined to change his circumstances.

“We gave him someone to talk to. We helped him with referrals and physical support as well. Over time, he’d come in smiling and looking more confident and hopeful for the future.”

Daniel sees himself as a typical Aussie bloke. Any one of his mates at the pub could have shared his struggles if they chose to get behind a wheel and were face to face with the law. But Daniel’s story is also shaped by his determination, stamina and willingness to improve his situation for the sake of his children.

“I’m putting the kids first now,” he says. “I have a heaps better relationship with them all. They look at me differently now I’m not the drunken idiot.”

Christmas 2018 was a contrast to the previous year. Daniel and his kids could celebrate in their home. And he managed to pick up a week’s work in December that enabled him to buy presents for the kids. But it still wasn’t smooth sailing.

“If it wasn’t for the Salvos, it would have been worse. Christmas would have been pretty hungry if they didn’t help me out,” he says. “They gave me a food voucher, which was very handy.

“Life’s been hard, that’s why the Salvos really helped me out in that 12-month period. Things are slowly getting there and getting a lot better. I’m loving life now. I turned my life around completely for the kids.”