Help support those in need this Red Shield Appeal. Find out more or donate today. 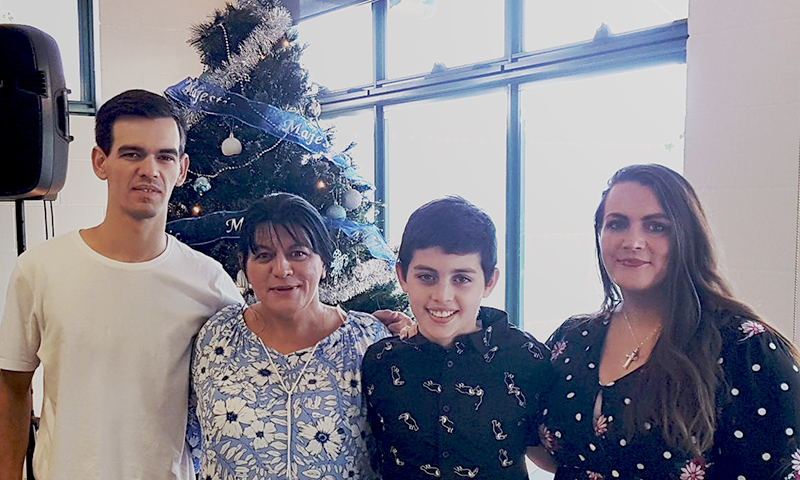 As Salvation Army volunteer, Barbara, saw the delight and emotion on the faces of those given Christmas hampers and gifts, she says she was in tears.

This past Christmas, Barbara and her kids played huge roles as Salvos volunteers. Barbara organised hampers, gifts and a free family fun day (through partner organisations) for local families in need.

Her two oldest children, both in their 20s, packed and distributed hampers at the Noosa Salvation Army and her youngest son, just 13 years old, helped out with a Christmas community donation drive organised between The Salvation Army and local fire brigades.

Over the past year, Barbara has also shared her story with hundreds of people at a Red Shield Appeal launch event to highlight the situations people find themselves in, and how in supporting the Salvos, generous Australians are giving hope where it’s needed most.

She has become a multi-skilled volunteer at her local SalvosConnect, a centre providing emergency relief to those in need in the community. Her eldest son is one of the youth leaders in the local Salvation Army corps (church) and her youngest son is about to become a junior leader.

Barbara finds it incredible, because only a year earlier she was totally broken and her family life was unbearably chaotic. But then she came to The Salvation Army for support at Christmas and everything changed.

The darkest of times

Barbara’s struggles began 12 years earlier. She was deeply depressed and one day found herself on auto-pilot starting to steer her car – and herself – off a bridge.

Worried about the black thoughts plaguing her, Barbara went to see her doctor. It was then she found out that what she was feeling was much more than the post-natal depression she thought she had.

Following a serious family rift, Barbara was alone, depressed and exhausted. She had gone through a pregnancy filled with severe undiagnosed pain then, after giving birth, was diagnosed with an aggressive form of cancer.

She underwent major surgery and treatment while caring for two older children and a three-month-old baby. Despite seeking help, Barbara says her depression never really lifted.

She eventually found a rewarding job in education and managed to raise her kids as a single mother. But for medical reasons, her doctor suggested she resign.

“Just before Christmas I stopped working [and how] I wished I hadn’t,” she says. “Soon I was so broke I fell into full on depression and gained a lot of weight.

“I became really stressed, depressed and lonely – feeling like I had nothing and was nothing.”

Barbara says she deeply regrets how bad her depression got. Most days her youngest son had to get himself ready for school while she spent her days in tears.

“I was experiencing suicidal thoughts daily, thinking I had nothing to live for,” she says. “My whole life was a black mess. I couldn’t see the future ahead of me at all.”

Barbara says her worries and fears increased as it drew nearer to Christmas.

“I was in a panic,” she says. “My kids don’t get many things through the year but they do get something for birthdays and Christmas.”

It was at that point a friend suggested Barbara see the Salvos.

“I don’t do that kind of thing. I never ask,” says Barbara. But, because she knew someone associated with the local Salvation Army, she sent a text asking if she might be able to have a small hamper for Christmas.

“I still get teary when I think about it,” she says. “They brought out a brand new mountain bike for my youngest son and a hamper, gifts and food. They gave me movie tickets and a voucher to get my hair done.

“They were crying and I was crying. I don’t think I’ll ever forget it. It was just overwhelming – really overwhelming.”

Later, the family was also invited to an annual Salvation Army outing day at a local theme park.

“It was a lovely day and the kids had so much fun,” says Barbara. “It was something I could never have afforded.”